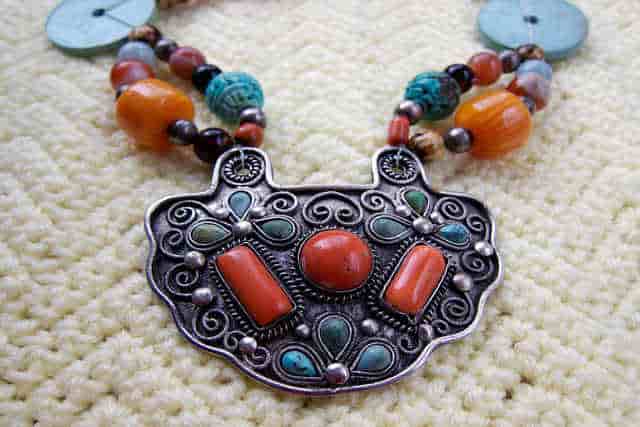 Archeologists believe the necklace was born during the stone age about 40,000 years before than previously believed. April 2004, scientists were excavating a cave in South Africa discovered forty-one mollusks that may have been strung as neck jewelry about 75,000 years ago.

Before this discovery the oldest known necklace to have been found about 30,000 B.C. They are made mostly of shells, bones, stones, animal teeth or claws, strung on a thread. Basically the same concept is used today though there are some variations

In 2500 B.C. gold was starting to be used in neck jewelry. Gold neck adornments and chokers have been discovered at the Royal Grave of Ur. They are in what is now known as Iraq. 2000 B.C. was when Sumerian bead neck jewelry started to use alternating patterns of colored stones and gemstones and metals such as copper or silver.

Ancient Egyptian neck jewelry evolved from simple stringed beads to complicated patterns and include the ‘broad collar’ and pectoral type. They were worn by both sexes, mostly royals and wealthy citizens. They were often buried with their dead owners.

During the Classical Greek period from about 480 to 300 B.C. most necklaces were three dimensional pendants. They were mostly in the form of heads, seeds, or acorns. They were suspended from a row of flat elements usually some type of rosettes.

Alexander the Great in 356 – 323 B.C. conquered the Orient. Gold was plentiful throughout the Greek Empire. It was often used on making in necklaces and other types of jewelry for several centuries.

In Ancient Rome the wearing of jewelry was frowned upon. Laws regulated how much gold could be worn by women or buried along with the dead. From about the first century on, Roman Jewelry began to distinguish itself. Gemstones came into use and were usually cut in circles or rectangular shapes.

In the end of the second century gold piercing techniques were invented. It produced a lace like quality in gold neck jewelry. The favored style of the time was a chain of differently colored gemstones connected by gold links.

In the second and third century it became popular to wear multiple necklaces all at the same time. The types of neck jewelry sometimes indicated the level of wealth or class of the wearer. Necklaces were very popular in whatever form could be made. Over the next few centuries the popularity of wearing of necklaces waned significantly. In the late 14th century necklaces started to regain their popularity due to fashions décolletage.

Since then however, necklaces are very popular among all the classes. A favorite gift of children to their mothers is the famed or infamous macaroni necklace. What mother doesn’t love such a gift from the heart? They are precious not in gemstones or gold but in sentiment and heart value.

Necklaces are worn now for a variety of reasons not the least of which personal adornment. Many people wear medals that are religiously significant such as those with images of the Saints or Jesus Christ.

Many wear a plain cross while still others will wear a Crucifix which is a cross on which the image of the body of Christ is fastened. It stands to reason that it can be said that necklaces have been and will remain a piece of jewelry that is completely versatile in its design and the intent of the wearer.