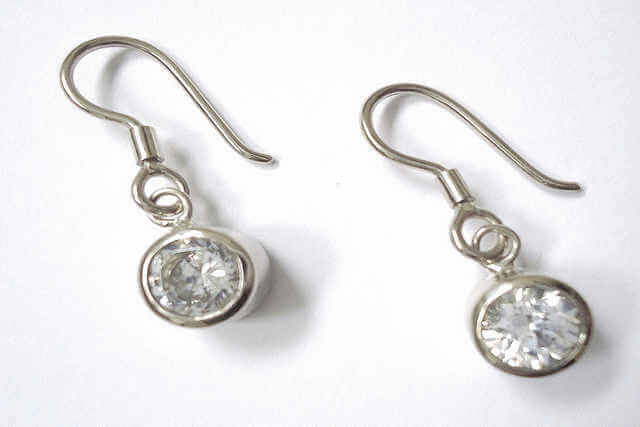 A diamond stud earring is made up of just one perfectly cut diamond, set in fine gold or silver. The simplicity of the design itself is its own selling point: anything fancier and you could easily fall into the trap of over-accessorizing. A single-stone earring is singled out for its sophisticated look.

A diamond is 58 times harder than the next hardest mineral on earth, corundum, the stuff from which rubies and sapphires are formed. Only diamonds can cut other diamonds. Ironically, diamonds are also brittle. If you hit one hard with a hammer, it will shatter. If it is placed in an oven and heated to about 763 degrees Celsius (1405 degrees Fahrenheit), it will simply vanish, releasing only a little carbon dioxide and NO visible traces whatsoever.

Contrary to popular perception, diamond stud earrings are not just for women! There are quite a few male celebrities who have popularized the use of ear accessories — Johnny Depp being among the more famous of them. Respected artists like Usher and Kanye West have taken to sporting diamond earrings. Morgan Freeman wore a diamond earring to a roundtable discussion of his movie “The Sum of All Fears” in Washington DC in May 2002.

If stud earrings ever looked elegant on a woman, ironically enough they fantastically boost the macho appeal of the men who wear them. The purity of the stone, the value of the stud, all speak highly of the man’s discerning taste, his eye for refinement. After all, uncouth bad boy-types aren’t the only virile types in the world — the snazzy, clean-cut James Bond figure has also been universally identified as irresistibly macho.

Diamond hoop earrings are perfectly popular these days, thanks to young pop divas like Jennifer Lopez or J-Lo, hiphop diva extraordinaire. J-Lo is also known for spreading the trend of the chandelier earring, and other cascading-style ear ornaments.

Now take another diva and examine her choice of jewelry. We’re talking about actress Elizabeth Taylor and her special fondness for diamonds. When she was dubbed a Dame of the British Empire, the nation held a “black tie and diamonds” event, to commemorate her love for that specific precious stone. Diamond hoop earrings are part of Miss Taylor’s not inconsiderable jewelry collection.

Take hoop earrings up another level and what do you get? Precious stones set into the hoops. What precious stone is considered the most popular, the most prestigious, and the most in-demand throughout the ages? Of course, it is the diamond.

Hoops, for their part, come in a variety of thicknesses and sizes. Sometimes they are so fragile as to create cascading earring designs, and at other times they are so thick that you can set stones and other materials into them. Hoop earrings used to be a favorite jewelry style among ancient Central and South American tribes, at a time when gold flowed freely and primarily held only decorative value.