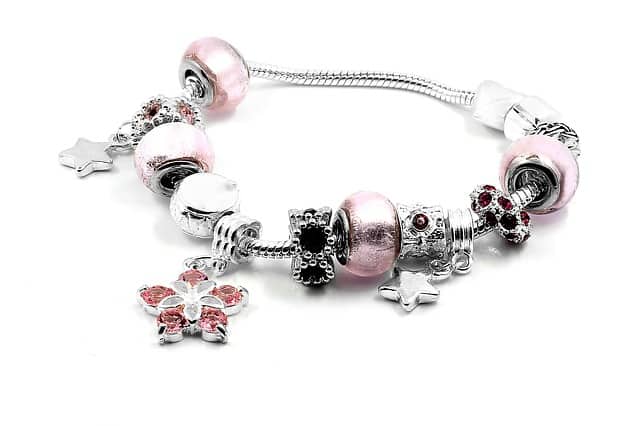 The historical custom of wearing charm bracelets dates back millenia, and though the materials and designs on them have changed, the concept itself has never gone out of style.

This form of jewelry initially had a religous function, and dates back to the prehistoric era. Based on data from Elizabeth Florence, president of the Jewelry Information Center, charm bracelets were first worn by Assyrians, Babylonians, Persians and Hittites from 500 to 400 B.C.

Those charms were created from lapis lazuli, rock crystal and other locally-available gems and were inscribed with symbolic designs, like figures of gods, humans and animals. They were closely associated with magical spiritual powers and served as protective talismans.

As time passed, charms diminished in religious significance and became fashion jewelry instead. The Victorians of the 1890’s spurred a renaissance of charms, due to their love of elaborate and intricate clothing and jewelry. Queen Victoria helped fuel the craze by wearing a charm bracelet of tiny lockets holding family portraits.

A second revival of charm bracelets occured in America in the Second World War era, as soldiers stationed abroad acquired charms as souvenirs from the European cities where they were stationed and brought these trinkets home as presents for wives and girlfriends. The fashion trend continued well into the 1950’s.

Many women begin their charms collection when still in childhood, and the charm bracelet grows along with them, reflecting hobbies and experiences. A charm bracelet can hold a tiny replica of a sports trophy, a wedding bouquet, or even lockets holding family photos.

As well, charms are popular gifts because of their affordable cost. An intricate silver charm can be found for less than 10 dollars, though it’s possible to spend 100s of dollars on a 18k gold charm set with gems.

Italian charms, a genre in and of themselves, don’t dangle from a chain like traditional charms. Instead, each pattern is soldered onto a flat link which snaps onto an extensible bracelet. The patterns consist of letters, symbols, pictures, precious gems, or even have enamel pictures painted on them. Charms can be snapped on and off these modular bracelets to come up with new configurations to match different moods and outfits.

These bracelets are traditionally manufactured of stainless steel, though the more expensive ones come in 18k gold. Each italian charm is of a standard interchangeable size and the resulting bracelet can be customized to any woman’s wrist; the smallest size holds seventeen or even less links, a medium eighteen, and a large nineteen or even even more.

There are different corporations which make Italian charms, however all brands are supposed to be interchangable on the basic bracelet. The “starter” bracelet of blank links costs around 5 dollars, and on the average charms run 15 dollars and higher.

Ironically, China also manufactures a great number of these “Italian” charms, and while they are popular due to their low price, a select few consumers report occasional oddities like reversed images and off-size fit on the standard bracelet.